By Jonathan Long Director of Community Advancement Earlier this month, 59 Wichita leaders and influencers ventured to Boise, Idaho to find out what has made the City of the Trees the country’s new “IT” place to live, work and play. In the last two years, Boise has appeared in articles from Thrillist to Forbes, highlighting its dynamic community. And from what we learned during the trip, all the praise is well-deserved. Firstly, let’s get this out of the way: Yes, Boise has mountains – foothills, actually – and Wichita will never have those. However, while that landmark provides a wonderfully aesthetic background to the city, the mountains are not the leading cause of Boise’s growth and excitement. That credit goes to the leaders and influencers in the area. The citizens of Boise, in partnership with those who hold positions of authority, really seem to consider the perspective that they deserve greatness, which is defined differently by the various people who spoke to our group. However, that greatness was summed up with a common vision that their mayor, Dave Bieter, spelled out for us on our first day – the vision of making Boise the most livable city in America. In presentations, whether the topic ranged from how the Boise State Computer Science Department has moved downtown to create partnerships with businesses, how the expansion of the city’s convention center led to increased tourism revenues and the construction of multiple hotels downtown, to descriptions of how the police and arts departments worked together, everyone felt Boise’s unified call to bring them closer to the city’s vision of livability. As Project Wichita enters its final stages, I hope that we as citizens, influencers, and those in positions of authority rally together behind a shared vision and create progress to advance our community in order for Wichita to become a place where everyone lives their best life. View the daily, one-minute video recaps here: Day 1, Day 2, & Day 3. 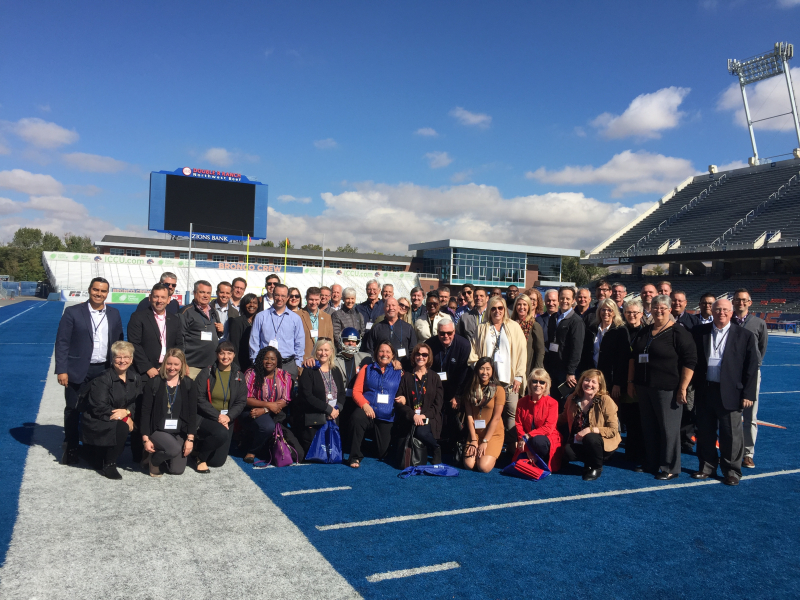 The City-to-City delegation toured the Boise State campus, including "The Blue" football field.