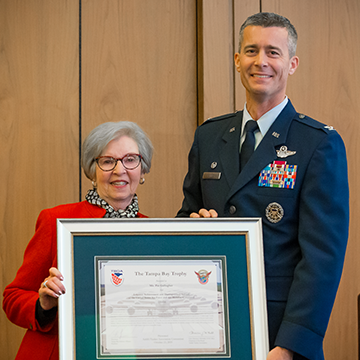 Pat Gallagher, Military Affairs Liaison for the Wichita Regional Chamber of Commerce, was recently presented the 2019 recipient of the prestigious Tampa Bay Trophy Award on Oct. 23. Created by the Tampa Bay Defense Alliance in Florida in consultation with Air Mobility Command (AMC) at Scott Air Force Base in Illinois, the national award honors a civilian for sustained and enduring service as well as contributions to community, AMC Airmen and families and the United States Air Force.

Gallagher was invited to Florida in October to accept the award during the annual Airlift Tanker Association Convention. Tim Jones, President of the Tampa Bay Defense Alliance, cited Gallagher’s “selfless devotion towards our military and the missions they accomplish” when announcing that she was the 2019 award recipient. Jones said that Gallagher “epitomizes the very best in the leadership and community support that’s required to make our Air Force the greatest in the world.”

Having served McConnell Air Force Base as an Honorary Commander since 1994, Gallagher received Golden Eagle recognition in 2009. She serves as the Director of the Friends of McConnell (a Chamber affiliate) and serves on the Governor’s Military Council, a statewide organization that works to grow and preserve military presence in the state of Kansas. She also serves on U.S. Senator Jerry Moran’s Military Council and has been an active member of the Air Mobility Command Civic Council at Scott Air Force Base in Illinois.

Gallagher joined the Chamber in 1983 and has worked in the Chamber’s Government Relations department since 1995. She is recognized throughout the region for her dedication to connecting the business community with McConnell Air Force Base. Gallagher said, “Doing something that ignites my passion and reaps such tremendous personal reward has been my good fortune in life. Being recognized with this honor is heartwarming, to say the least.”

Chamber President and CEO Gary Plummer said that Gallagher was well deserving of the award since it recognizes the influence and impact community members have in mobilizing their community to support the mobility and Air Force missions. “Pat is tireless when advocating for McConnell Air Force Base. She’s passionate about doing everything within her power to convince all who serve at McConnell AFB to eventually make Wichita their permanent home. Pat provides the community continuity needed to ensure that the Base leadership feels welcomed and that they feel instantly connected to the region.”

The current President of the Friends of McConnell echoed Plummer’s comments. Jack Pulley said, “Everyone at the Base knows that she’s the first point of contact for critical missions where civilians are needed to play an important role. Several years ago the Friends of McConnell group was pivotal in helping secure the KC46 tanker mission for McConnell Air Force Base. We hosted events to demonstrate the civilian support for that mission and keep the public informed about the economic impact of the Base. We can always count on her to lead the way. Her enthusiasm and love for the Air Force are unparalleled in this community.”

Gallagher’s award was recognized at the conclusion of a Nov. 11 Federal Issue Forum with U.S. Senator Moran and the Sunrise Scrambler on Nov. 13, both hosted by the Chamber. Special thanks from the Chamber and Pat to Joel Rodell, Mike King and Ben Hutton for the video that Hutton graciously filmed and produced to congratulate Pat on her outstanding award. We appreciate the time, effort and energy that Joel and his team put into this special project.