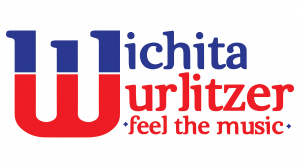 Please tell us about the Wichita Wurlitzer.
Wichita Wurlitzer, Inc, is a non-profit performing arts organization that presents its unique and historic theatre pipe organ—the “Wichita Wurlitzer”—in concerts, silent film screenings and other special events that showcase the instrument’s innovative features and special capabilities. The organ lives in Exhibition Hall at the Century II Performing Arts Center. Originally built nearly 100 years ago for the Paramount Theatre in New York’s Time Square, the Wichita Wurlitzer is a singular cultural asset, an underappreciated treasure that Wichitans should be proud to call their own.

The organization has no paid staff members, and instead relies on the passion and elbow grease of volunteers, champions and its working board. Our board is growing, with new members coming in that together represent a cross-section of sectors, including aviation, engineering, finance, education, marketing and the performing arts. 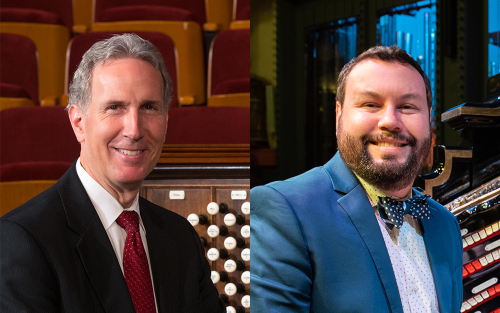 Do you have any upcoming events?
We’re excited to present two fun shows this spring. The next is The Principals on Tuesday, March 17 at 7:30 PM. Two of the country’s top performers, Richard Elliott (left picture) and Brett Valliant (right picture), take turns in a friendly battle at the console spanning classical, jazz and contemporary music favorites. Elliot is principal organist at the Mormon Tabernacle in Salt Lake City. A native son of ICT, Brett Valliant is regular organist at Organ Stop Pizza (home of the world's largest Wurlitzer) in Arizona and the Wichita Wurlitzer’s resident artist. Wichitans know Brett for his annual Christmas concerts as organist and director of music at First United Methodist Church, where he served for 20 years before taking up his full-time pizza parlor gig in Arizona.

Our second show this spring, Big Band Jazz, is Tuesday, May 5, again at 7:30 PM. The concert features Wichita’s Delano Jazz Orchestra, again with Brett Valliant at the Wurlitzer for some good “battle of the bands” music. Both events are in Exhibition Hall at Century II. Food and adult beverage concessions are available. Tickets and details at Wichitatix.com.

What is something people may not know about the Wurlitzer?
Many people who know there is a special organ in Century II mistakenly believe the City of Wichita owns it, or shares in its ownership, as is the case with other cultural assets, such as the Cowtown Museum. In fact, Wichita Wurlitzer, Inc., a 501(c)(3) non-profit corporation, has sole ownership of the instrument. The City of Wichita covers utilities but all other expenses are Wichita Wurlitzer’s responsibility, including rental fees, which it pays alongside other Century II resident organizations such as Music Theatre Wichita. The Wurlitzer is sustained virtually entirely by donations and tickets sales from our local community and by the work of our volunteers.

What differentiates the Wurlitzer from other entertainment?
One way to think about the Wurlitzer is that it’s a gigantic symphony orchestra at the command of ten fingers and two feet. (Think Wizard of Oz.) The instrument consists of a console with four keyboards, hundreds of stops that trigger different sounds and 2,700 pipes, ranging from six inches to 32 feet. The whole thing weighs in at a staggering 66,000 pounds.

Originally called a “unit-orchestra,” the instrument was designed to mimic the sound of a 100-piece orchestra. A performer uses brass, string, woodwind and other percussion sounds to accompany silent movies, ensembles, and vocalists as well as perform virtually any style of solo repertoire. Because of our instrument’s special size and pedigree, the sound it makes is both extraordinary and literally sensational—so powerful that listeners actually feel the sonic waves pulse through their bones. The only way to have this full experience is to hear the instrument live at Exhibition Hall.

Can you share some historical facts about the Wurlitzer?

The Wichita Wurlitzer has an amazing story. It was originally installed in the Paramount Theatre in New York’s Times Square and premiered November 19, 1926. The instrument was legendary in its day and is still widely considered the greatest theatre organ ever made. Removed from the Paramount in 1964, the Wurlitzer embarked on an eight-year odyssey across the country, gathering dust in a Los Angeles warehouse before at last finding a new home, via four-and-a-half semi-trailer trucks, in a new Century II Performing Arts & Convention Center, then taking shape against the Wichita skyline. An arson fire destroyed the console and damaged the organ days after its arrival in Kansas, but volunteers put in a heroic 12,000 hours of labor to rebuild, restore and install the organ in time for a triumphant Wichita premiere at Century II in 1972.

What social media channels do you use to promote your events?
We record all of our concerts and publish video excerpts regularly on our YouTube channel. YouTube has really helped us to reach more people, enabling locals to get a taste of what the Wurlitzer can do. Because our videos capture the fast fingers and fancy footwork of the organist up-close, they encourage people to come hear the instrument live at a concert or silent screening. It’s also helped us to reach people who can’t attend a show. We now have more fans across the country and around the world, from Sweden to South Africa, and from Britain to Australia. Of course, our Facebook page is another critical promotional tool.
Facebook page:  https://www.facebook.com/wichitawurlitzer/
YouTube Channel: https://www.youtube.com/c/WichitaWurlitzer

Why did you join the Chamber?
We joined the Chamber to share information about the Wichita Wurlitzer, one of “Wichita’s well kept secrets,” an instrument you must hear in person. The most valuable aspect of Chamber membership is to promote the internationally known Wichita Wurlitzer as the finest instrument ever conceived and built.

Where can readers learn more about the Wurlitzer?
Deobrah Shaar with KMUW did a nice profile of the Wurlitzer last year. Follow this link to read more.